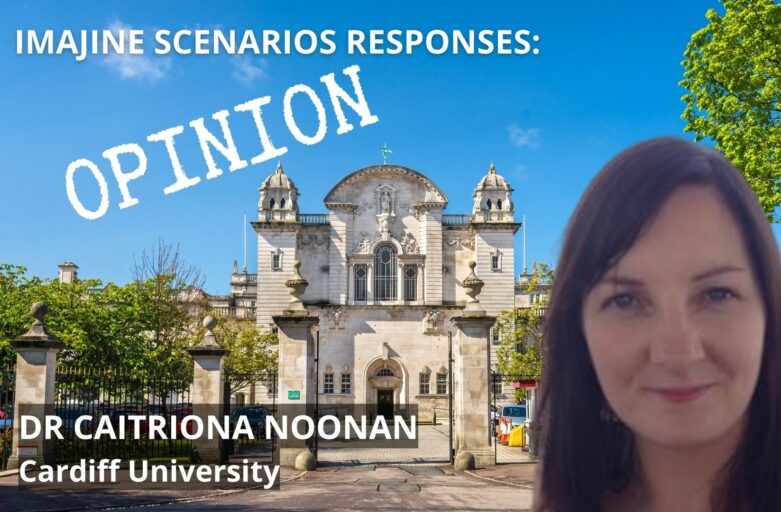 In her response to the IMAJINE scenarios, Dr Caitriona Noonan, Senior Lecturer at the School of Journalism, Media and Culture, Cardiff University, highlights the already-emergent trends in global media service provision, the concerns about the sustainability of European screen culture, and the future of public broadcasting in many European countries.

One of the most prevalent coping responses to the pandemic has been to engage in forms of futurology. Whether it is thinking about where we as individuals might go once restrictions are lifted, or collective musings on the future workplace and the role of the office, the pandemic, coupled with the imminent threat from climate catastrophe, has sharpened our attention on the world beyond today. Therefore, I welcome this report as an opportunity to think systematically and creatively about that future and so my contribution to that task is to reflect on the future of film and television making and its makers.

In approaching this, I want to pause briefly to consider where we are now. Global services like Disney and Netflix have embedded themselves further into our homes and into our national media systems. Perennial concerns about the sustainability of European screen culture continue, however the threat is now arguably greater due to the impact these new services are having on the provision of public service broadcasting in many European countries. These organisations have long been critical funders, producers and distributors of content to diverse audiences, including those without the deep pockets that subscription services woo.

The pandemic confirmed the need for public funding and support for screen.  Even the Hollywood blockbusters and high-end TV dramas that are often used as a proxy for the health of the sector, are supported by a dense and interconnected web of direct and indirect subsidies, tax credits and soft investment via public service broadcasters and national screen agencies. Therefore, in this piece I hold public funding as a constant and consider what the various scenarios mean for the logics of funding.

In this scenario we see the prominence of algorithms as a tool for centralised and objective decision-making. Given how streaming services have leveraged algorithms to secure competitive advantage today, it is not difficult to see how this would be extended to think in terms of funding tomorrow. Here, a quantitative system could decide on the allocation of funding based on the ‘quality’ of projects. Artistic excellence and cultural expression have long been subjective criteria for film and television, though subject to criticism of bias and elitism. In this scenario a quantitative system could be applied (perhaps not dissimilar from the current tax criteria), with the content with the most points being funded.

Some will support this move as it places a semblance of ‘order’ on the allocation of public funding in terms of transparency and efficiency. However, we must remember that in media-related algorithms, popularity and previous selection (‘because you watched this…’) are defining criteria. Therefore, what is likely to emerge is funding consolidated around more of the same.

As it would in all selective scheme some great content will undoubtedly come from this – some film makers will pivot well to the requirements – but what will be lost is the range of content. The more experimental, the radical and the local will cede ground to the popular. A homogenous range of content and genres will emerge which will eschew risk-taking and will lead to further marginalisation of some audiences who rarely lack the numeric power of more majority audiences, especially if this takes place in the pan-European structures proposed here.

Given the context I outlined at the beginning, this is the easiest scenario to envisage, and conceivably the one that is most troubling. It is relatively easy to see how Netflix, Amazon, Disney, but also Facebook, Youtube and Google are central to this infrastructure, becoming critical gatekeepers to the ways in which citizens access content – the growing discourse around the ‘metaverse’ that we see today is perhaps prescient to this scenario’s narrative.

Whilst we could argue that public service broadcasters may enable a positive formation of this due to their socially and geographical embeddedness and their more robust governance structures, it is difficult to see how they (even collectively) might have the scale and resources which would be required here. Indeed, this scenario seems to implicitly signal the end of public service broadcasting.

What would our film and television look like in this scenario, where these transnational corporations had more control over what gets made? Like in the Silver Citadel, the outcome is likely to be one of a decrease in the range of services. Again, there would be break-out hits, but it is difficult to see how niche content with more limited market potential would be delivered continuously and serving potentially small audience. For many the immediate danger would be to local news services, but equally at risk would be the range of content that tells stories about and for us – independent film, minority-language content, and content with strong local fibres to its storytelling.

In this scenario the premise seems to be that funding and support would be allocated for ‘good’ things, specifically to address climate justice. It is tempting to see this as the panacea to some of the less desirable elements of the other scenarios. Here, film and television industries are not beyond responsibility. The screen sector is a significant contributor to climate change due to its global mobility and some wasteful production practices. Therefore, for the sector to further adapt to the issue of climate change is a good thing.

To do this, cinematic excess will need to give way. A sector predicated on big set-pieces and chasing international investment will need to find alternative modes of working. One route to this is with smaller production using local resources efficiently. Another is through a technological solution where innovative tools such as VR replace the need for physical presence. Both are happening now in the industry, but they would need to become the default, although it is slightly difficult to assume this transition as many of the current systems for distributing funding, such as around co-production agreements, are predicated on this mobility.

However, I would caution against a prediction of this being a comprehensively positive scenario in terms of our film and television cultures. Within any funding system skewed to one thing – whether it be the market, national culture or, as here, the laudable goals of social justice – there is a trade-off. A system which is entirely orientated to any of these frames, may need to compromise on its creativity, accessibility and diversity.

The stories told on screen will be a central component to bridging some of the fragmentation that characterises this scenario. Diverse groups will need to be given access to the means of producing stories which shows us all how we come to terms with daily life in this version of Europe.

One of the defining structures within film, in particular, has been in terms of nation – both as a means of support and as a cultural marker i.e. French cinema as distinct from British or Italian cinema with its own aesthetic qualities and mechanism for support. This can be problematic, for instance in terms of giving substantial power to major nations. This version of the future challenges those formations as it flushes away these old distinctions. Citizens reject these national constructs and so it offers the potential for more diverse ways of conceiving of the medium, its aesthetic properties and its industrial structures.

However, institutional distrust is also a critical issue identified here. At a time when the need for a public service broadcasting ethos and system might be most pressing in order to foster connection and understanding between people, this scenario seems to suggest that they have been reticent and so they reap the consequences of diminishing support amongst their publics.

What is clear from this exercise is that we are at a critical moment in terms of the structures of our film and television sectors. In each scenario there are possibilities for good but also there are compromises, especially in terms of the diversity of audiences served and the creative range of the content. For me, as an evaluative task it has underpinned the need for need for a graceful balance between principles in all four: the concern for both spatial and social justice, the formations of new communities, and the regulation of our digital infrastructure. To prioritise any one of these at the expense of the others would be wrong as these stories of the future vividly illustrate.