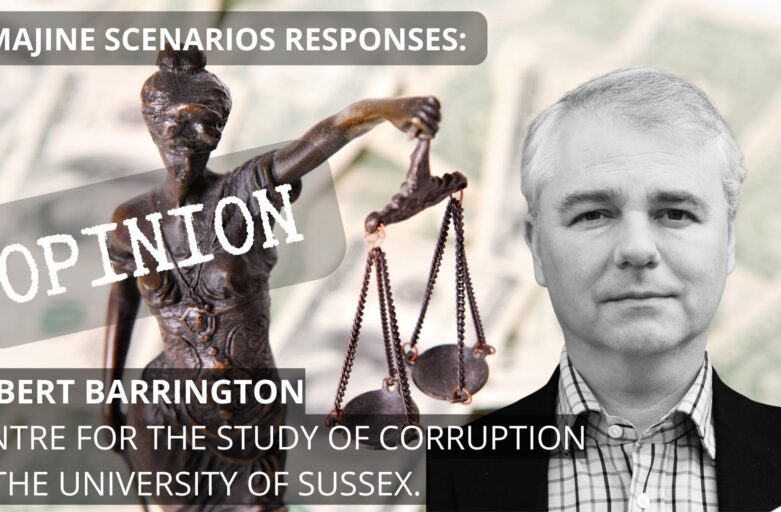 In this response to the IMAJINE scenarios, Professor Robert Barrington of the Centre for the Study of Corruption at the University of Sussex explores the future of corruption in each of IMAJINE’s four visions for Europe in 2048.

Corruption is on the rise across the world.  It can be seen in its old forms – such as bribery and nepotism – and in newer forms – such as state capture and global flows of corrupt capital.  National and coordinated international responses are both needed; but both domestically and internationally, all too often corruption is tackled selectively and used to neutralise political opponents, while enhancing the potential to increase the money and influence of those in power.  The rise in corruption is often accompanied by assertive nationalism, the removal of checks and balances such as an independent media, and populists who campaign on concocted anti-corruption tickets.  To anyone doing scenario planning, this grim trajectory must be part of the thinking.

But it is not inevitable – and the pleasure of scenarios is that it gives space to look at alternative futures which are both feasible and plausible.  Positive prospects for tackling corruption include the new accountability through social media; strengthened institutions and anti-corruption oversight; a realisation that there is a present danger which must not be allowed to crystallise; and the potential for democracy to produce politicians with integrity and vision.

Against this backdrop, each of the Imajine scenarios can be viewed through the lens of corruption risk: in other words, what risks would need addressing to ensure that corruption does not impede optimal outcomes?  A key starting point is to realise that corruption – the abuse of entrusted power for private gain – can undermine any objectives at any time, and should be a constant consideration for the successful management of any political economy.  That does not mean it always needs to be the higest priority: but it needs to be there on the list, and we neglect it at our peril.

This is more or less a business as usual trajectory, in which we can foresee that current  trends in corruption continue.  In Europe at present, these are around organised crime, populist governments, and low-level but persistent corruption in newer EU member states.  The expansion of the EU could develop into a culture clash around issues of corruption and governance, raising the awkward question of whether liberal democracy is compatible with a state emerging from imperial domination.  Hungary might find itself with more allies in pursuing illiberal democracy, conflicting with the EU’s core values and embedding a form of corruption at the heart of EU decision making.  Meanwhile, corruption on the ground, hand in hand with a rise in organised crime, would put a severe strain on cross-border standards and law enforcement.

The envisaged emergence of Eastern Europe as an industrial powerhouse will raise numerous issues around enforcement of consistent standards in relation to lower wages and less restrictive working practices.  As other emerging industrial economies have found, corruption will be a prevalent risk around certification and licensing.

Strong institutions like the International Climate Court can provide a framework for accountability and the rule of law.  But money attracts corruption like a magnet, and the huge resources devoted to managing and mitigating climate change have the potential to undermine rather than strengthen global efforts to tackle the problem.  So any framework to address climate change that the Court might enforce would need transparency and anti-corruption measures hard-wired into the design.

The urban ghettoes that are envisaged would be a recipe for both civil unrest and an informal political economy in which corruption would thrive.  This would increasingly pollute the mainstream economy and also risk a democratic backlash if corruption were not addressed.  The key message is that, quite apart from the other good reasons, to avoid high levels of corruption,  poverty-stricken urban ghettoes should be avoided at all costs.

This scenario envisages two major centres of power – with the state and with multinational corporations.  The power is internsified due to a combination of concentration of power and the levels of data held on individuals.  Significant concentrations of power mean that when such power is abused, the consequences are also significant, for both individuals and society.  The key issue here is therefore how the power can be balanced.  Transparency allows citizens to be informed, but it is not enough in itself.  It must be accompanied by regulatory and oversight mechanisms that deter abuses of power, and enable those who exercise power to be held to account.

A picture of radical decentralisation respecting local values rings alarm bells.  Such systems are prone to capture at local level by warlords (who may be non-military populists) and special interests, and in this case it would be a capture that is not re-balanced by being part of a supranational structure. Imagine an EU composed of several states like today’s Hungary.  Preventing such capture in democracies is extremely hard.  Key to this are a free and independent media and a strong independent judiciary.

The prospect of a ‘Chinese-sponsored Africa’ does not bode well for either the citizens of Africa or the citizens of Europe, if current Chinese corruption within Africa were to continue.  For Europe, this raises the prospect of trading with, or migrating to, kleptocratic regimes with strong authoritarian tendencies.  The key question here is whether China and the CCP will change course.