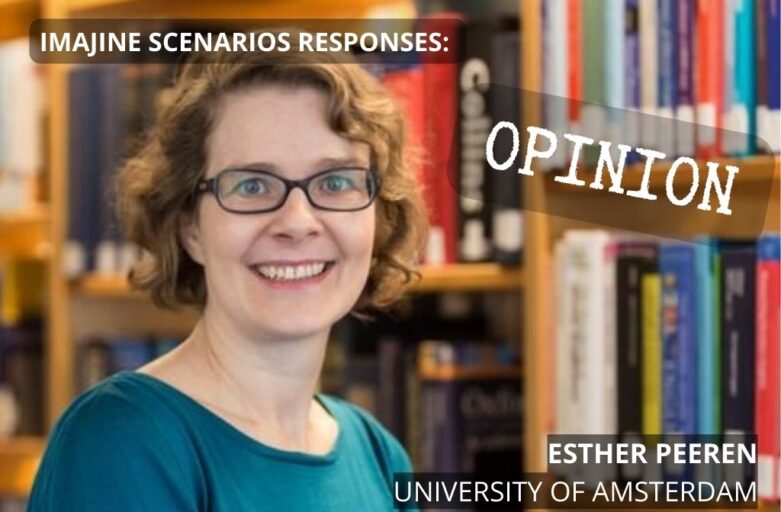 Esther Peeren is Professor of Cultural Analysis and Academic Director of the Amsterdam School for Cultural Analysis (ASCA). With Jeroen de Kloet, she is series editor of Palgrave Studies in Globalization, Culture and Society. From 2018 to 2023, she leads the ERC-funded RURALIMAGINATIONS project.
RURALIMAGINATIONS is project on contemporary cultural imaginations of the rural based at the Amsterdam School for Cultural Analysis. It considers how widely read and watched novels, films and television series influence what aspects of globalized rural life become (in)visible, which, in turn, affects how the rural can be mobilized politically. RURALIMAGINATIONS compares five national contexts across four continents: the UK, the US, the Netherlands, China and South Africa. It also examines how certain imaginations of the rural (such as idyllic ones) have achieved global reach.

In this response to the scenarios, Esther reflects on how the rural is evoked in each, particularly how dominant perceptions of rurality might elicit a range of reactions to spatial justice challenges or opportunities.

As a literary scholar, I approach the IMAJINE scenarios as stories that might but do not have to come true. The scenarios are what feminist philosopher Donna Haraway (2016) has called “speculative fabulations” or “speculative realisms” – rather than seeking to predict the future or escape from the present, these are ways of “staying with the trouble” in the present, for the future. Like all science fictions, the IMAJINE scenarios prompt us to ask: if this is a possible future and we find it desirable or abhorrent, what do we need to do now to realize it or keep it from being realized? Haraway proposes her own scenario in advocating for a “multispecies storytelling” that would work towards Terrapolis, a realm of “becoming-with” in which the human would no longer be at the center, as it remains in all four IMAJINE scenarios. Terrapolis would be a version of the Green Guardian where solidarity is radicalized into a “multispecies becoming-with” entailing “response-ability” to the Earth as a whole, with this planetary scale, instead of than the European one, considered the most – or even only – meaningful unit of wellbeing.

As Principal Investigator of the ERC-funded project “Imagining the Rural in a Globalized World” (2018-2023), I am interested in how the feelings and desires attached to the rural affect its material organization and political mobilization. With regard to the IMAJINE scenarios, this leads me to ask, first, what existing imaginations of the rural different scenarios draw upon and, second, how they might reimagine the rural. With regard to the imaginations drawn upon, it is striking that the name of Haraway’s Terrapolis – against her emphasis on this space turning human into guman, “that worker of and in the soil” – conjures an image of an urbanized space, an Earthcity.

The IMAJINE scenarios all evoke the rural to some extent, but overall the pole of economic prosperity aligns with urban dominance, both in the Silver Citadel and the Silicon Scaffold, while the pole of wellbeing aligns with a revaluation of rurality and nature, at least for some. In fact, the descriptions of the Green Guardian and the Patchwork Rainbow suggest that these scenarios draw on traditional idyllic associations of the rural with, on the one hand, healthy living (with the rural promising “the good life” even though rural areas have been major sites of colonial and capitalist extraction and ruination) and, on the other, isolation and timelessness, readable, in the Patchwork Rainbow, both positively (as a localized paradise) and negatively (as a throwback to the Middle Ages).

The only scenario that no longer seems reliant on a sharp rural-urban divide is the Silver Citadel, which envisions this divide as more or less smoothed out by a centralized European welfare state. However, in an echo of Raymond Williams’ (1973) diagnosis of colonialism as rebuilding “the traditional relationship between city and country … on an international scale,” the Silver Citadel displaces city-country or center-hinterland inequalities to the global and even interplanetary scale.

It is suggested that the Silicon Scaffold will exacerbate the rural-urban divide – and rural people’s sense of being left behind – because of its transferal of large parts of life and work to the digital realm and because regions get to hold on to the wealth they have generated. But wealth is created in rural areas, too, especially through the extraction of natural resources (which a digital economy also requires) and agribusiness (more and more adept at using digital technologies), so it is not inconceivable that some of the corporate walled gardens of this scenario would be situated in the rural. In addition, as the Covid pandemic made clear, if more people are able to work from home, they might choose to live in the rural, especially if romanticized imaginations of the rural that conceive of it as a refuge persist. Unless, that is, these escapist fantasies were also transposed to the digital, so that Silicon Scaffold inhabitants could live out their rural “good lives” in VR versions of games like Stardew Valley, without needing to venture into actual rural realms.

The Green Guardian is said to reverse the urban-rural balance, but if the mass escape to the country it presages were to unfold would the rural not quickly end up urbanized? Would the rural still be the rural if it were densely populated and would the urban still be urban if it were not? And does the rural really offer protection from some of the developments that characterize the Green Guardian scenario, like the spread of zoonoses? The Covid pandemic suggests otherwise, with many rural areas hard-hit and ill-equipped to deal with this. The emphasis the scenario description places on perceptions – in speaking, for example, of competition for territories perceived as safe from the ravages of climate – indicates the crucial role played in Green Guardian by what people feel about urban and rural spaces. As the penchant of today’s rural voters for supporting populist-nationalist politics hints, people might bristle at having to give up the fantasy (however unattainable) of rural abundance for a rural life in which excess is passé, which has to be shared with climate refugees (even white European ones) and which values the protection of the environment equally to or above human wellbeing. Instead of relying on environmental disaster (the flooding of the Netherlands) to move Europeans towards valuing the solidarity and wellbeing poles over those of economic prosperity and autonomy (with this outcome by no means guaranteed if we go by history), it might be worth asking what imaginations should be fostered in the present to make Green Guardian – or its radicalization as Terrapolis – a more likely outcome.

Patchwork Rainbow seems more realistic than Green Guardian about where currently dominant imaginations of the rural and their attendant politics might take us. Increased polarization and bubbles (in real life and online) are in evidence all around us, and at the same time it is clear that many communities are not satisfied by getting to define their own values but seek to impose them on others. The degrowth communities envisioned as part of Patchwork Rainbow offer little hope; they will not be able to achieve any true sustainability, as climate collapse can only be averted by action on a planetary scale. Although the world this scenario envisions is not one I would want to live in, it does envision different rurals (progressive and regressive) and makes explicit the dangers inherent to the fantasy of the rural idyll as an isolated paradise shaped by a homogenous community, as well as underlining that such isolated worlds are not exclusive to the rural but may also exist in urban areas and online.